The yellow C7 Z06 arrived at our shop already a track veteran and not 100% stock.  Over the years of owning the car and running a number of tracks here in Texas he had already upgraded the radiator, added a splitter, wing and a set of lightweight race seats.  Other than that, it was 100% stock.   What the customer knew is that it needed to be faster, lighter, and stop better for sure.   We had talked about upgrading the engine and supercharger cooling systems to allow it to keep running on track and stay out of limp mode during the summers here in Texas or possibly just changing the engine setup completely.

Enter our friends at HPR, who with the customer built this new power plant that the other upgrades would be based around.

He had already removed a good bit of weight by going to a aftermarket OMP race seat in the car.

Now force and been upgraded as well with the above shown splitter and rear wing kit.

The new engine was most certainly going to remove some nose weight from the car with the removal of the supercharger and all if it’s cooling support systems (more on total weight changes later as we continue the car).

Another way to drop some weight and increase the performance was to remove the OE iron disk C7Z brake setup for something that can take on track abuse lap after lap after lap.  So the OE system is being replaced from our good friends at Essex Racing Parts with a full AP brake kit, front and rear. 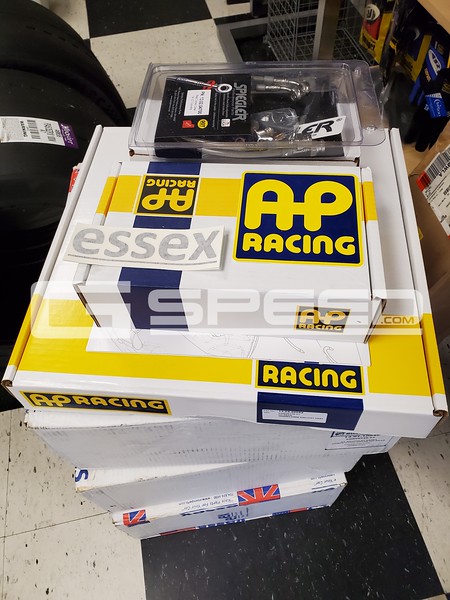 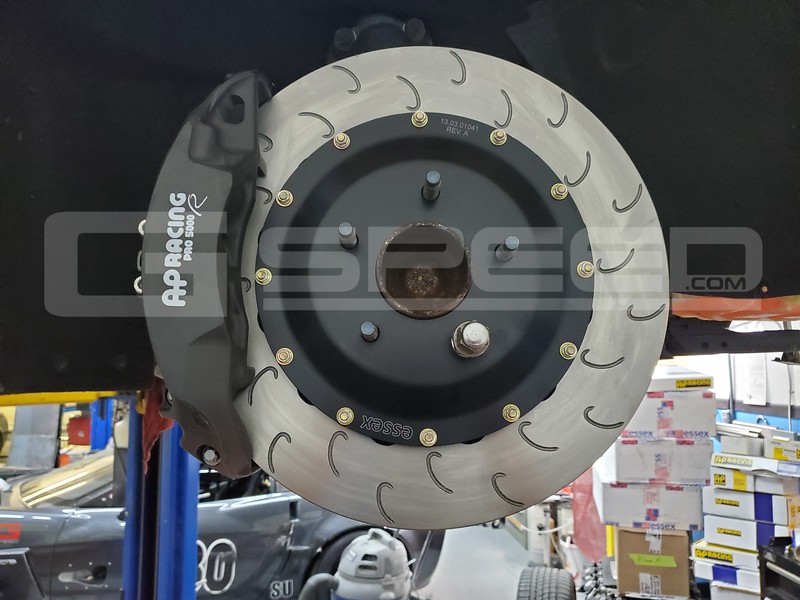 Anyone that has followed along with our builds knows that we LOVE these brakes.  Impeccable quality and performance that has allowed us, and our customers, to win races and championships alike.  Not only to they allow us a wide range of pad selections but they offer a reduction in un-sprung and rotational weight (about 10lbs a corner on average) but consistent performance and pedal feel lap after lap on track under the most stressful conditions.   Even by going to a much larger caliper and wider pad, their design gives us a rigid and light caliper..one of the rare times you CAN have your cake and eat it too.

We also knew going into this that while we were losing a supercharger on this engine and power was going to change.  The new NA power plant was much larger than the stock 6.2L LT4 going up to a massive 7.7L build but NA. Having used HPR 468 LS builds in a number of projects already we were assuming this was going to be north of 650whp, a good 100 more than what the LT4 would do stock on a good day, we needed to update the clutch to something better too.

Again, looking for a way to drop weight as well as improve responsiveness on track we went with a Tilton ST-246 kit for the C7. 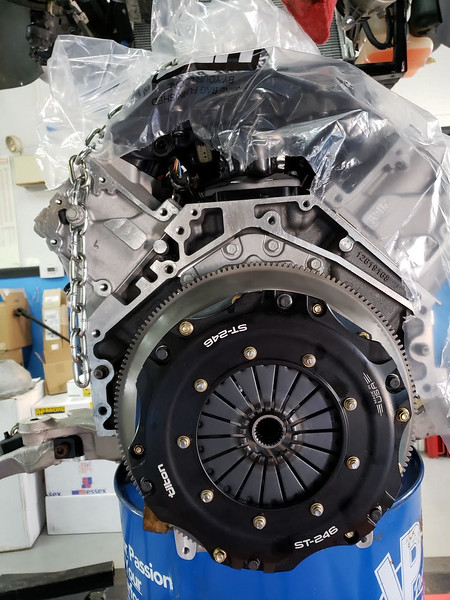 Tilton has been used in a number of our cars and never let us down.  These new ST-246 kits are setup from Tilton as a replacement for a number of cars including the C7.  We have a number of these listed on our web store if you would like one for your application too!  Here we dropped another 20+lbs (60lbs for the OE, 36lbs for the Tilton) of not only weight...but rotational weight as well.

The guys at HPR fully dressed the new engine, intake to oil pan and also included a new 4 stage ARE dry sump oil system for the engine that will require some plumbing and a new oil tank to better control, route, and supply oil to the engine on track. 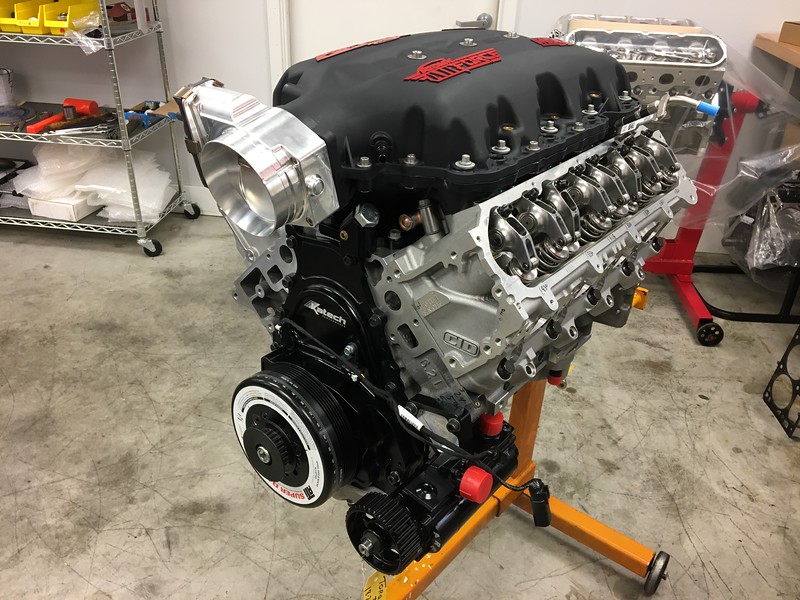 Unlike most all dry sump systems for the LS engines, this is one of the vary rare times that you can keep the A/C system with a aftermarket multi stage dry sump pump running off the front of the engine. 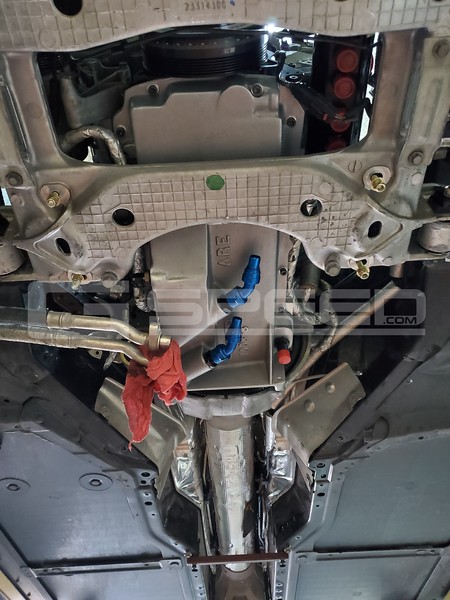 Here you can see the new oil pan and the OE oil supply lines that will soon be removed.   Unlike the OE dry sump system this will have one pressure and 3 scavenge (OE is one and one) stages to the pump.  This will aid in removing excess oil from the engine and helping to create a vacuum in the crankcase rather than pressure that is typically seen.

Top side the oil pump mounts on the lower driver side of the engine and tucks in nice and snug around the steering rack and engine mount.  In this mock up we felt like some added clearance needed to be done on the rack incase we needed to service the oil pump belt in the car. 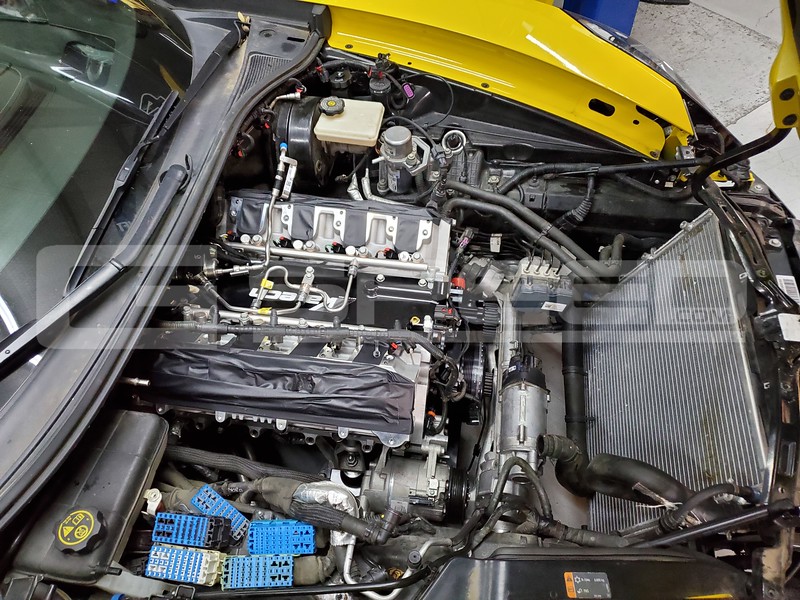 To install the engine and finish up our wiring and install we removed the intake manifold and taped off open ports on the engine.  Exhaust will be going on next along with the rest of the accessories.